skip to main | skip to sidebar

Yet another surgery for my hubby coming up in a month.  We more or less knew it was coming but had to play the "jump through hoops & etc" with several doctors before they finally said ok so it is your back & you can learn to live with the pain or have surgery.  Ed picked surgery since it was now affecting his feet.
Posted by Ed & Dottie at 2:26 PM No comments:

We decided it was time to try our hand at putting the items that I make on line to see if they will sell. The name of the business is Bag Lady at bag-lady.ecrater.com
Posted by Ed & Dottie at 11:18 AM 2 comments: 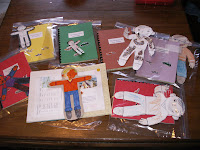 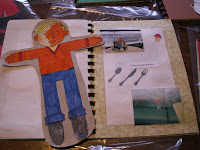 Our grand daughter Sarah had a project to get some adventures for her Flat Stanley. So since we were going on a cruise we said we'd take him with us. Then her siblings wanted a Flat Stanley too. So we then have 4 then three of Sarah's cousins wanted to have Flat Stanleys too. We then had 7 Flat Stanleys with us. So we took pictures of all of them doing different things. We then made little scrap books for each one.
Posted by Ed & Dottie at 2:00 PM 2 comments: 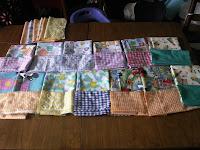 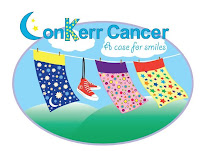 I read an article in a magazine about making pillowcases for kids that have cancer or other major sicknesses. I thought this sound like a nice project. There were no groups in our area so I offered to start a group. Little did I know how much work it would be. I did make 31 pillowcases mostly with fabric we bought. This is not a cheap project. After a bit of time & much thought & prayers I decided maybe God didn't really want me doing this or at least not being the one in charge of the group. I made up that many pillowcases & dropped them off at the hospital now I will "retire" from this project. I have pictures of the pillows done but can't find it right now, will add later.
Posted by Ed & Dottie at 2:33 PM No comments: 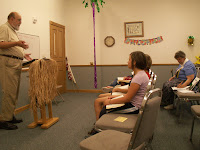 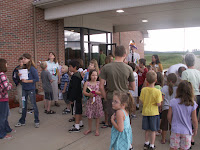 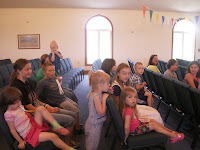 Our church had what they call Neighborhood Bible Time which is a bit new to us. We are used to Vacation Bible School in the summer. We were honored in that they let us teach even though we hadn't been there the required 6 months.
Posted by Ed & Dottie at 3:08 PM No comments:

Play Time in the Park 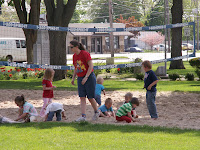 It has been awhile since I have posted anything so I will try to get some of the stuff on. I might end up with it all out of order but it is all since April so there is a bit to remember when it was & etc. This is a picture of 7 or our grand kids playing in a local park. If you count there is one extra boy in the picture. Guess he thought it looked like fun & wanted to join us.
Posted by Ed & Dottie at 2:52 PM 1 comment: 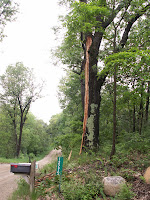 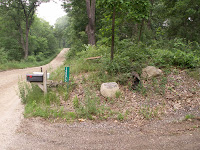 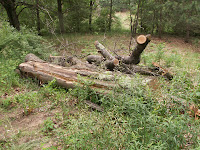 Last summer lightening hit one of our trees out by the mail box. We didn't know if it would make it or not. But this spring we could see it had died. We called the road people & they came & cut it down for us. One pictures is the pile of the big pieces.
Posted by Ed & Dottie at 1:43 PM No comments:

Ed & Dottie
We are a Christain couple, married more than 43 years. We have 4 lovely children & 20 grandchildren. I have been a stay at home mom, since having our first baby. I was working as an LPN when we met. He was asked to retire in Dec of 2001, after 25 years there he worked as a CADD designer of seating layouts. We have found that since retirement we have been busier & have a lot of different adventures than before. We are loving the adventure.